Being Best Man is never without its stresses, but being a best man with multiple sclerosis gives you other matters to think about... 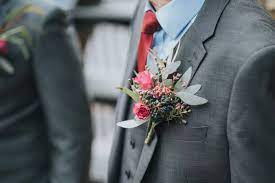 I’ve reached that age where some of my friends are onto their second marriage. When my closest friend decided to marry again recently he asked me to be best man. Of course, I agreed, even though the position usually leads to untold stress for the ‘lucky’ appointee. Stress isn’t great for those with MS, but what could I say other than, “I’d be delighted.”

Fortunately, it proved to be more of an honorary title. The stag do was organised without any input from me and he didn’t even want me to do a speech. Just greet people when they arrive, look after the ring and conduct a few toasts at the reception.

So not too much stress. Well, you’d think, wouldn’t you. Half a dozen attempts at tying my tie in the hotel room meant I was late for greeting people. Nothing to do with MS – my arms and fingers are fine. It was just that dressing smartly is way out of my comfort zone and I have to wrestle with a tie once every two years on average.

And the responsibility of the ring! I gripped it tightly in my suit pocket for most of the pre-reception drinks. All the while, I kept thinking about when I proposed to my wife-to-be on a barge in Paris. The box containing the ring was in the very tight trouser pocket of my jeans. As I struggled to pull it out from its hiding place, my hand shot upwards and I almost chucked the ring into the Seine. 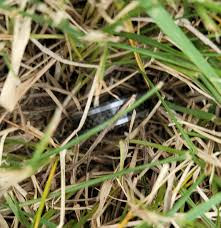 What if I dropped this one as I tried to pass it to the groom and it went skittering across the floor into the long grass behind the outdoor stage, never to be seen again?

This scenario was what was playing on a loop in my head while everyone else was listening to the vows and enjoying the romantic occasion. Of course, when my moment came there was no ring mishap and I could finally relax a little.

My greatest challenge, however, actually began once the ceremony was out of the way. Spending time with my oldest friends with a drink in my hand on a manicured lawn on a sunny day at one time would have been my idea of heaven. Now this kind of socialising was coloured by the fact it involved a great deal of standing.

I had elected to leave my walking stick in the room. It would just get in the way and be one more thing to carry and worry about. So I had nothing to keep me upright other than my MS-addled legs. I was coping while we were stationary, chatting, but once we were ushered inside to the reception I became all too conscious of the fact that I was swaying like a drunk.

Being a best man who looked like he’d been hitting the sauce from early in the morning is not the look I was hoping to cultivate. Without a walking aid, guests who didn’t know me (and there were many of these) would have had no idea that I had multiple sclerosis. To them, I must just have been pissed, and possibly an alcoholic. Perhaps they just thought I had been trying a bit too hard to calm my nerves before my speech (which wasn’t even happening).

Whatever, I had to grip Kate’s hand as we walked in and was very grateful when we reached our seat.

The nerves did soon start again, as the time approached for me to do the toasts. Eighty pairs of eyes were about to be fixed upon me, waiting for a man with no history of or training in public speaking, to smoothly thank all the right people in the right order.

One of the groom’s sons did his best to distract me from my anxiety. He wasn’t acting like he was drunk due to illness. He was properly pissed out of his head. His attempts at cutting up his chicken were comical, as his head lolled and his eyes clearly strained to focus. He must have thought the chicken still had some life in it and was deliberately evading his knife in the hope of self-preservation.

I found this slightly less funny when thirty seconds before I was ‘on’, his fork skidded across his plate as he continued to battle his poultry and he proceeded to splatter gravy onto the three guests to his left. One of whom was me. The suit I had just spent fifteen quid having dry cleaned, along with the tie that was making its debut appearance all got a light dousing. Dexter would have been in his element establishing the source of the spatter pattern, if it had been blood and not gravy.

So I got to do my toasts while all the time wondering if my audience could see the spots of gravy on my tie. ‘Not really surprising that he’s spilt down his front. He was clearly drunk before we’d even sat down. But how did he manage to get gravy down the side of his suit? Poor sod.’

I think I did OK, though... for a pisshead covered in gravy.

For the evening do I knew I’d get tired. Fatigue mixed with the drinking of an afternoon session meant I would have to take my stick out with me. As always, it made me feel a little self conscious, but as alcohol took an ever firmer grip, I began to care less and less.

This was particularly true when I realised the advantages it was affording me. For example, when I headed down a corridor to get somewhere, people gave way to me like I was royalty.

And I always hated being pressured into dancing at a wedding. There were a few years back in the late 80s and early 90s when I quite enjoyed getting down to Goth and grunge anthems, but even before MS, as I got older, I generally felt uncomfortable whenever I found myself on a dance floor.

Cheesy wedding disco music was another thing altogether. This always had me running away screaming. Now I couldn’t run, but that was my 'getout' – every time anyone tried to get me up on the dance floor to get down to the cheesy music, I just reached under the table and held up my walking stick, coupled with a wan smile. “Of course, I’d love to, but it’s this friggin’ MS.”

But my friend’s wife had other ideas. She was in a dancing mood and even though she knows I have MS, she was not taking no for an answer. “I have no balance,” I said. “I’ll fall over.”

“I’ll hold you up,” she said, quite reasonably and very annoyingly.

But she was already hoisting me to my feet, which was some achievement as she is only short. I looked down at her from what seemed a very lofty perch. I mean, I always knew she was short but I was literally head and shoulders above her. I flirt with six foot but nothing more. She is very familiar with five feet. 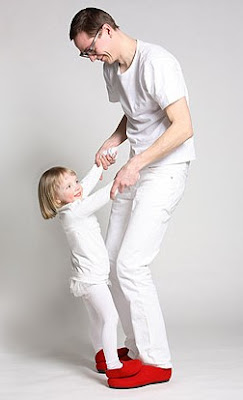 What she lacks in inches, however, she made up for in grip. She was not letting go of either hand. I suddenly felt like Stephen Merchant dancing with a child, the type of dance you often see at a wedding – an adult indulging a toddler. It didn’t help that it was ‘I’m a Believer’ by the Monkees. I associate it strongly with the end of the first Shrek film, a film I watched on repeat with my son when he was pre-school.

Falling over now seemed like the better option. But she was holding on for grim death, something which also seemed like a preferable option to performing this pathetic and childish dance. All I could do was grimace and bear it, counting the seconds till it was over. Hey hey we’re the deeply embarrassed.

It finally moved onto the next song and she released me. I slumped back into my seat. What was the point of having multiple sclerosis if you couldn’t get out of dancing to songs you don’t like at a wedding? I guess she didn’t want for me to think I was being left out because of my disability, but I was actually thinking bloody brilliant. Another hidden advantage of having MS.

Oh well. One song in ten years is not much to complain about, I guess. And I’ll probably never dance again.

I bloody hope not.

[To order Balls to MS: 20 Years of Discovering Your Body Hates You, follow the link below, where you can also read reviews.]

Being Best Man is never without its stresses, but being a best man with multiple sclerosis gives you other matters to think about... I’ve re...