RON’S VISION OF THE FUTURE 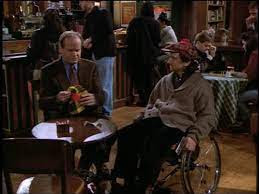 We’ve had to take on a gardener. With a brilliant sense of timing, we bought this house with its sizeable garden around three months before I was diagnosed. Now I can just about manage to cut a small lawn before my 52-year-old body collapses back onto the patio furniture. This constitutes around 2% of what needs to be done. It’s unrealistic to expect Kate to pick up the remaining 98%, as evidenced by vegetation spiralling out of control, so needs must.

Ron is fitter than me. And he’s seventy-odd. He makes your average dour Yorkshireman seem like Russell Brand, but he’s a hard worker. This makes me sad on more than one front: I hope I’m not having to scratch around for extra cash at that age and I’m also sad that even at my age I already can’t do what Ron does. God knows what I’ll be like when I’m in my seventies. Probably being wheeled out of the house so I can enjoy the garden, rather than having any pretension to tending it.

Of course, guilt has quickly raised its head on this, Ron’s inaugural visit. I’m bringing drinks to a septuagenarian like I’m the lord of the manor 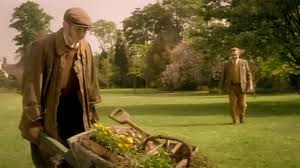 and he’s some kind of Mellors character whose shagging days are long behind him. My feelings of awkwardness are exacerbated by it being a scorching hot day. During our verbal exchange on account of me delivering a cold drink to him – it’s too stilted to call it a conversation or even chat - I quickly have to slip in the information that I have MS and this is why I can’t do the work myself, not that I’m too moneyed (definitely not true) or too lazy (OK, partly true) to do it myself. 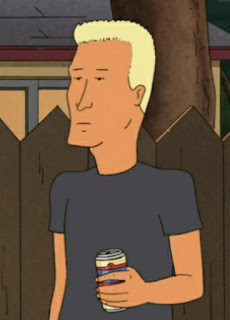 Ron sucks in this information like Boomhauer in King of the Hill. I wait for him to reply with, ‘Yup,’ like the taciturn friend of Hank Hill, or maybe he’ll go with a loquacious, ‘Can’t do much then?’ But no. Ron offers a nugget of information I wasn’t expecting to hear.

His face contorts into a pained expression. I wonder if I shouldn’t have asked, as maybe he’s still coming to terms with it, but soon realise that he’s just delving deep into his memory bank to remember.

‘Must be, erm… around twenty years now. Maybe just over.’

What he tells me next gets my attention.

And I truly am, but not for entirely unselfish reasons. I’ll be coming up to my twentieth anniversary soon and I’m not talking about the happy occasion of my marriage. I’m referring to when symptoms of multiple sclerosis first entered my life. It was four years afterwards that I was diagnosed. That means I’ll be catching up with Ron’s daughter soon in terms of timescale. Just two or three years. OK, let’s not panic. We all know that MS can affect people in vastly different ways and employ varying time sequences. Maybe she’s got secondary, or even primary. Maybe she had a major relapse, if it’s of the relapse-remitting type. I do a bit of digging, though not the type for which Ron is known.

What Ron proceeds to tell me sends a shudder through me that has been keeping me awake at night ever since. The pattern of his daughter’s MS has matched mine like the most terrible mirror image (think Ann Widdicombe staring at herself with self-loathing the morning after her latest bender) – she’s just been a couple of years ahead of me, even by age. For the first few years it barely affected her life. She had strange sensations in her limbs but was still able to get around fine and was even playing sports for a good while. But then she started to go downhill. Fairly gradually, but then in the last two or so years, everything’s accelerated and now, now she’s presumably in a wheelchair. I don’t get so far as to ask. I guess I’m too busy reeling from this summary of the woman’s life, a woman I’ve never met but whom I feel I have because her life is basically my life, at least if you hang it on these few details.

I gather my thoughts, which isn’t a pleasant experience in the circumstances. ‘I’d quite like to meet her if possible.’ I’m thinking some more details directly from her would be useful. Maybe she can somehow make the terror more palatable. Ron, however, retreats back into his flat-capped shell.

‘Aye,’ he says, in a vague, non-committal way. What am I to make of that? Certainly, I won’t be expecting him to be setting up a tête-à-tête any time soon. If I want to make this happen, I’ll surely have to badger him on several more of his visits. Maybe there’s no point anyway. Maybe she’ll just be a junior, female Ron and I’ll garner few, if any insights from her. Alternatively, she could be open and talkative and tell me lots of things that I don’t want to hear.

I’m giving it some thought on whether or not to pursue it, in between the waves of panic, depression and hope. The way my symptoms have progressed up till recently I was optimistic that I would at least get to retirement age before my legs completely packed up. But the last couple of years have seen an acceleration of my disability. Just like Ron’s daughter.

I’ve tried to raise my new concerns with some of the people close to me but been met with the predictable line of empty reassurance, ‘You don’t know it’ll go that way. That’s just one person. Your situation could be completely different.’

I know, I know, but listening to Ron’s description of the way things have gone for his daughter makes it clear that it’s a distinct possibility. My walking days may be numbered. And in years that number is two. 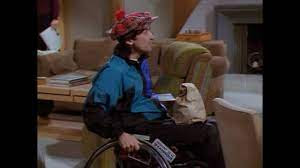 Or to put it another way, do you know that episode of Frasier when Frasier befriends a guy in a wheelchair? He soon regrets it because it turns out this particular disabled man is a crushing bore who’s obsessed with barbecuing. Frasier lives in fear of the approach of this man in his favourite coffee house, an approach that is always announced by the squeak of one of the wheels on the guy’s chair.

That’s how I feel right now. I can hear the squeak in the distance and I dread its approach. Unlike Frasier, I won’t be able just to scarper when this level of disability shows itself, because I’ll be physically incapable.

But what can I or the medical fraternity do about it? F all. My only defence is to double my efforts to make the best of what I now have. Let’s fill that diary and block out any noise I sometimes hear of an approaching squeaky wheel.

[To order Balls to MS: 20 Years of Discovering Your Body Hates You, follow this link - ORDER NOW]

RON’S VISION OF THE FUTURE We’ve had to take on a gardener. With a brilliant sense of timing, we bought this house with its sizeable garden ...